Eneon-ES has developed a Microgrid Energy Storage System (ESS) to supply continuous reliable power to an industrial agricultural application with both off-grid and grid-interconnected facilities. The system designed by Eneon-ES provides DC- coupled solar PV power with energy storage, with the flexibility and reliability needed for the critical application.

When a large Canadian industrial farming company, with nationwide operations, decided to expand one of their Ontario farm facilities, they needed to determine the best way to meet their new energy requirements. At the time, the facility consisted of several large barns receiving 240 VAC, single-phase power from the grid. For the new expansion to the facility, the farm owners chose to invest in their own power generation assets, looking to solar PV and energy storage to allow them to reduce their reliance on the grid and take control of their energy costs.

The new barn facilities would require 480 VAC, 3-phase power, with no grid-interconnection. The system would also be required to have a secondary grid-interconnection to the pre-existing single-phase system at the same site, to provide further opportunity to reduce costs.

The main objective of the Microgrid Energy Storage System (ESS) developed by Eneon-ES was to provide reliable, off-grid 480 VAC, 3-phase power to the new industrial farm facility. The secondary function of the system was to control bidirectional energy flow from the ESS to the pre-existing grid-interconnected farm facility. The ESS control system optimizes the solar PV output to maximize the system’s efficiency.

Power electronics, battery storage and control equipment are housed within the EonCB (Containerized Battery) system. The EonCB consists of a highly modified shipping container, housing lithium-ion batteries with 770 kWh of storage capacity. The ESS uses a large solar array to rapidly charge the centralized battery system, with a diesel generator backup to be used for charging if the batteries are discharged.

The ESS is controlled using a custom-designed site controller which implements a Microgrid Optimization Algorithm developed specifically for the industrial farm application. A key feature of the system involves a weather forecasting algorithm, to predict upcoming solar conditions and maximize use of the available solar PV array output.

To maintain system reliability, multiple redundant hardware systems are employed, in addition to the backup generator. Using a remote monitoring system, EonCB can be monitored online via secure web access.

Design of the Energy Storage System 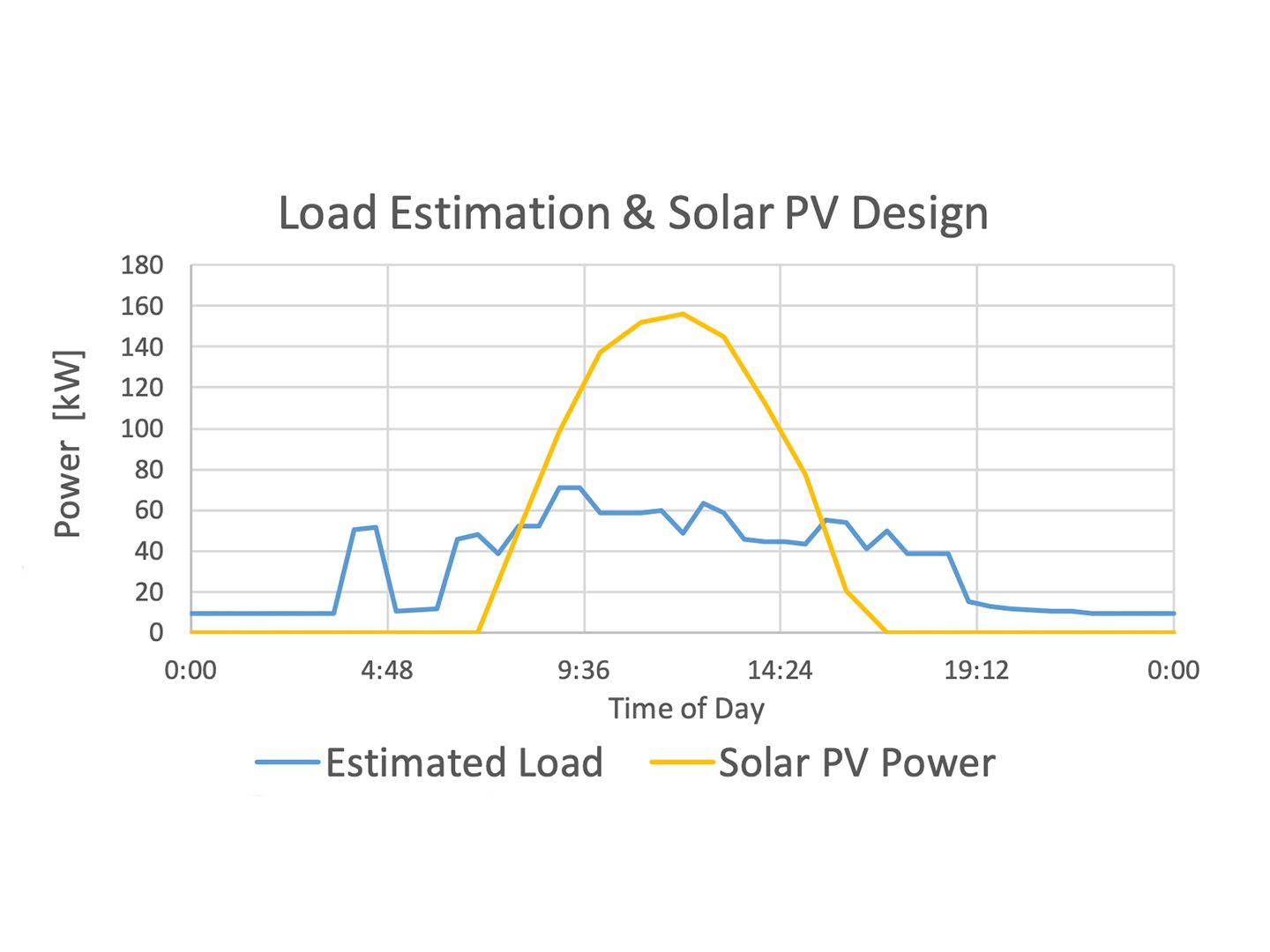 The load profile was analyzed over a full year – Fig 4-2 shows the monthly energy requirement. Load and shading analysis was carried out to determine the solar PV array size and layout required to meet the load demand. The solar PV array was sized for winter load conditions, resulting in a 250% over- capacity in the summer months. During operation, the site controller utilizes a Microgrid Optimization Algorithm to determine the most effective use of excess solar PV power capacity. 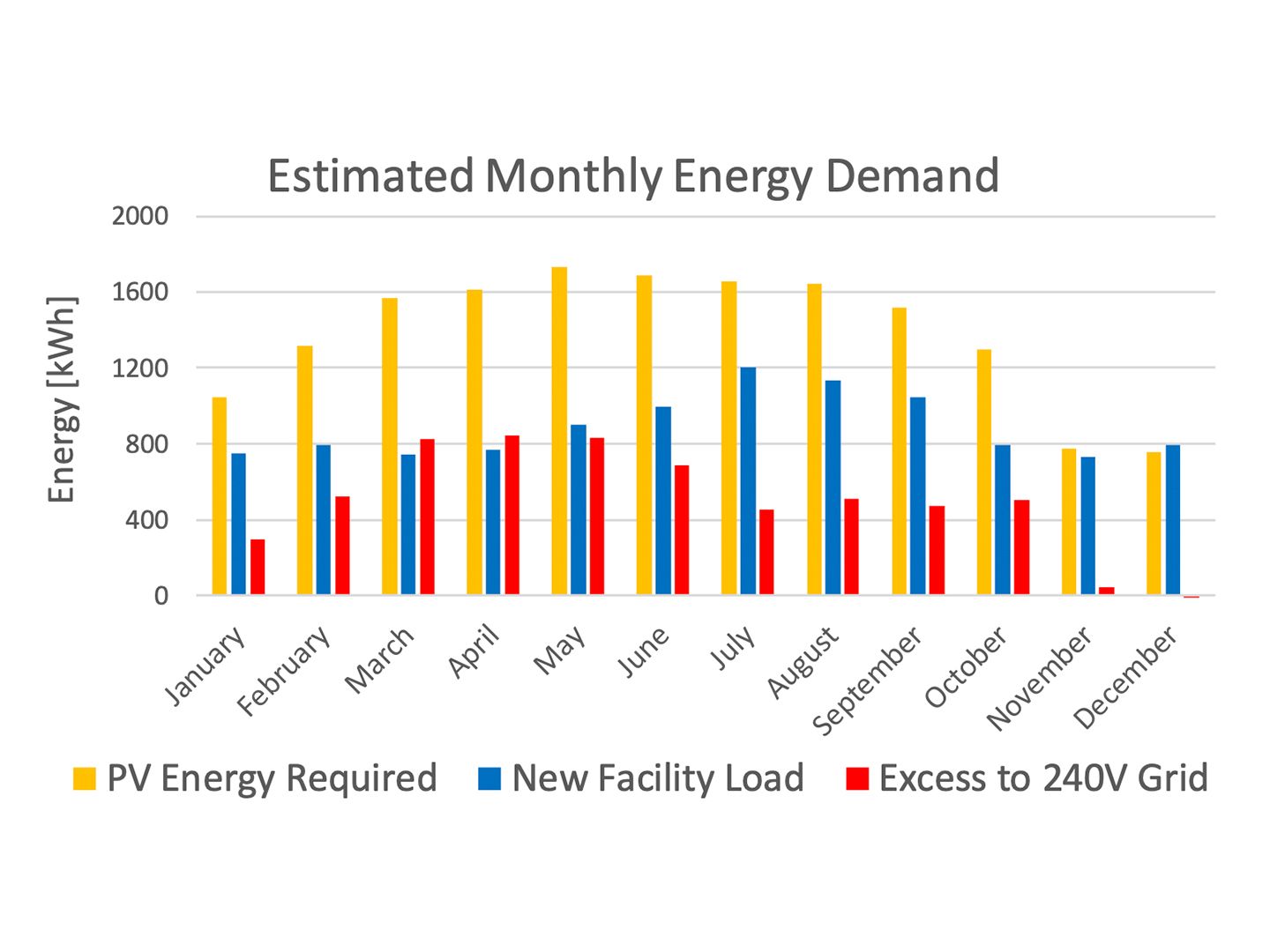 The load profile was analyzed over a full year – Fig 4-2 shows the monthly energy requirement. Load and shading analysis was carried out to determine the solar PV array size and layout required to meet the load demand. The solar PV array was sized for winter load conditions, resulting in a 250% over- capacity in the summer months. During operation, the site controller utilizes a Microgrid Optimization Algorithm to determine the most effective use of excess solar PV power capacity.

The primary function of the ESS is to supply off-grid 480 VAC, 3-phase power to the three barns that make up the new industrial farm facilities. The system uses a 500kW DC- coupled solar PV array to charge a 770 kWh centralized battery storage system within the EonCB (Containerized Battery).

The ESS includes a backup diesel generator, for use in the case of extended solar unavailability, or other unforeseen conditions. The design implements a cycle charging generator control strategy, allowing the generator to rapidly charge the batteries while also supplying the load in parallel. The inverters allow for flicker-free synchronization with the generator, which eliminates operational disruption to the farm.

Due to the critical nature of generating power for the farm facility, a high value has been place on the resiliency of the system. Multiple inverter units are included in the design, providing redundancy and reliability. The ESS also includes an automatic transfer switch (ATS) which provides a redundant backup to the EonCB ESS. In the event of a fault state that prevents the ESS from generating power, the ATS can bypass the ESS and connect the facility directly to the backup generator until the issue is resolved.

In the case of supplying power to the grid-interconnected, single-phase system, the ESS control strategy determines the optimal power to push back.

The timing and amount of power to be supplied is determined by the ESS Microgrid Optimization Algorithm, which takes into account solar PV output, battery charge level, 3 phase load, single-phase load, and forecasted weather conditions. The predictive algorithm aims to maximize the efficiency of the system by making optimal use of the available solar PV power.

Due to limitations of the grid-interconnection, the site controller will ensure zero export restrictions are always met.

To optimize system efficiency and cost savings, there are also situations in which drawing power from the grid may be preferential. In the case of extended solar PV unavailability, use of the grid is more cost effective than utilizing the diesel generator. In these cases, the grid is only used to support the load until solar PV availability has returned.

The ESS Microgrid Optimization Algorithm takes these scenarios into account and only draws from the grid when it is most efficient to do so.

Feel the power. Build your own Flexblock, online.

Discover the ultimate flexibility Flexblock provides to energy companies across Canada and the USA.